North Carolina:  The Triad!  This triangle-shaped area is bounded by High Point, Winston-Salem, and Greensboro.  We hit two out of those three and made our own custom Triad by adding in one more, the inspiration for the classic TV show locale, Mayberry!

But first, High Point is known as the “Furniture Capital of the World,” and in case you don’t believe it, the World’s Largest Chest of Drawers drives home the point when compared to a teeny-tiny Philip.

Built in 1926, it also has the World’s Largest Smelly Socks, and has been featured on MTV and the Travel Channel.  It would have been cool if the drawers opened up and you could crawl inside, but alas, it’s just the front of a regular ole building … here’s the side view.

We found the World’s Largest Chest of Drawers to compare favorably to some of our other World’s Largest throwbacks, including W.L. File Cabinet (Vermont) and W.L. Picnic Basket (Ohio).

In Winston-Salem, the shell-shaped Shell Service Station (say that 10 times fast) from 1930 was one of eight in this area, but the only one remaining.

The restored gas pumps and replica lamp posts were donated by corporate Shell Oil to complete the restoration of the station.

This landmark is now the office for a group called Preservation North Carolina.  It looks like a darling candidate for the “tiny homes” movement, or throw some wheels on it and call it the world’s cutest RV!

In Kernersville (about 10 miles from High Point), the 1880’s architectural oddity known as “Korners Folly” was originally the home of a designer, known as “Man of a Thousand Peculiarities,” who used the place to showcase his interior design ideas, many of which were quite unconventional.

The 22-room house is now a museum that displays all of the original furnishings and artwork, as well as elaborate hand-laid tile.

Though closed due to Covid-19, we peered through the windows and confirmed that this would be a fascinating tour, with multiple levels and ceilings that could be as low as 5 1/2 feet, or as tall as 25 feet.  Murals were painted everywhere, even on the bottoms of staircases.  You can read more about this unusual place here.

Old Salem is a historic district of Winston-Salem, featuring a living history museum.  In non-Covid times, costumed guides provide interpretive demonstrations related to lives of the Moravian community that founded it in 1753, including tinsmiths, cobblers, gunsmiths, and bakers.

Since you (as we) probably called in sick on Moravian Day of high school history class, we will inform you now that the Moravian Church is a Protestant denomination that began in the Kingdom of Bohemia and Moravia, now part of Czech Republic, in 1457.  /end history lesson, and exit Wikipedia/

George Washington spent two nights here in 1791, and likely grabbed his morning latte at the oldest continually operating bakery in the U.S., the Winkler Bakery.  Still popular today, Moravian sugar cake is sweet and buttery, and Moravian cookies are known as “the world’s thinnest cookie.”

Though the Winkler Bakery is famous, guess which bakery is even more famous?  That’s right, Krispy Kreme was founded right here, when Vernon Rudolph rented a building in Old Salem in 1937 and began selling locally.

At the boundary of Old Salem, the Mickey Coffee Pot was created in 1858 by the Mickey Brothers.  A symbol of hospitality, it was meant to advertise their tin shop.

A unique cemetery, Salem Moravian God’s Acre, is beautiful for its simplicity, with rows upon rows of nearly-identical gravestones.

With a lack of huge statues, looming monuments, and ostentatious odes to oneself that can be found in many cemeteries, the matching gravestones symbolize the idea that in death, we are all equal, and no one person is more important than any other in the eyes of God.

Mount Airy is the place to go when you miss “a simpler time, a sweeter place, a lesson, a laugh, a father and a son.”  Actor Andy Griffith grew up here, and it is said to be the inspiration for Mayberry on the ’60s hit TV series, the Andy Griffith Show.  Andy and Opie were kind enough to take Sprinkles along for their stroll to the fishin’ hole.

… Wally’s Service Station (be sure to ask for Goober) …

… and even take a tour of the town in Barney Fife’s patrol car.

The only Mount Airy business ever mentioned by name during the eight years of the show, Snappy Lunch remains a legend for their famous pork chop sandwich.

In ordinary non-Covid times, the line will go around the block for people waiting to watch their huge piece of battered pork tenderloin being grilled in the front window. Order it “Charlie’s Way,” its comin’ at ya with coleslaw, mustard, chili, onion and tomato.  Read more about the charming history of this place AND the pork chop sandwich here.

The Whittler’s Wall in Mount Airy has statues of people or industries important to the town’s history.

It is called the Whittler’s Wall because it was here that men would gather to whittle sticks, tell tall tales, chew tobacco, and trade knives and watches.

So many of these ne’er-do-well’s would gather, in fact, that pedestrians couldn’t use the sidewalk anymore.  So much so, in fact, that the Chief of Police closed the wall in 1956 by prohibiting sitting or whittling on the wall.  Except these guys (and gals), of course.

The City-run campground in High Point was one of the nicest in which we’ve stayed, and our site was right on the water, making for easy kayaking and gorgeous views out Elsie’s windows.

Roadsides in this time and place are crowded with one of two things:  wildflowers like these poppies, and Covid-related entrepreneurs.

It was also during this stop that we celebrated Mother’s Day.  I made a “virtual” bouquet from just a few of the wildflowers we’ve seen so far on this trip and sent to some of the mothers in my life.

I also received a virtual gift for Mother’s Day … a personal message from Sandra, “The Queen” on my favorite reality-TV show, Survivor!  According to the message, she and her husband are going to become RV’ers soon, too!  I’m fan-girlin’ on her big time so this was such a fun surprise!

Watch the clip here if the video above doesn’t work!

Next up, we head into North Carolina’s Blue Ridge for some tall trees, long-range views, and hiking galore! 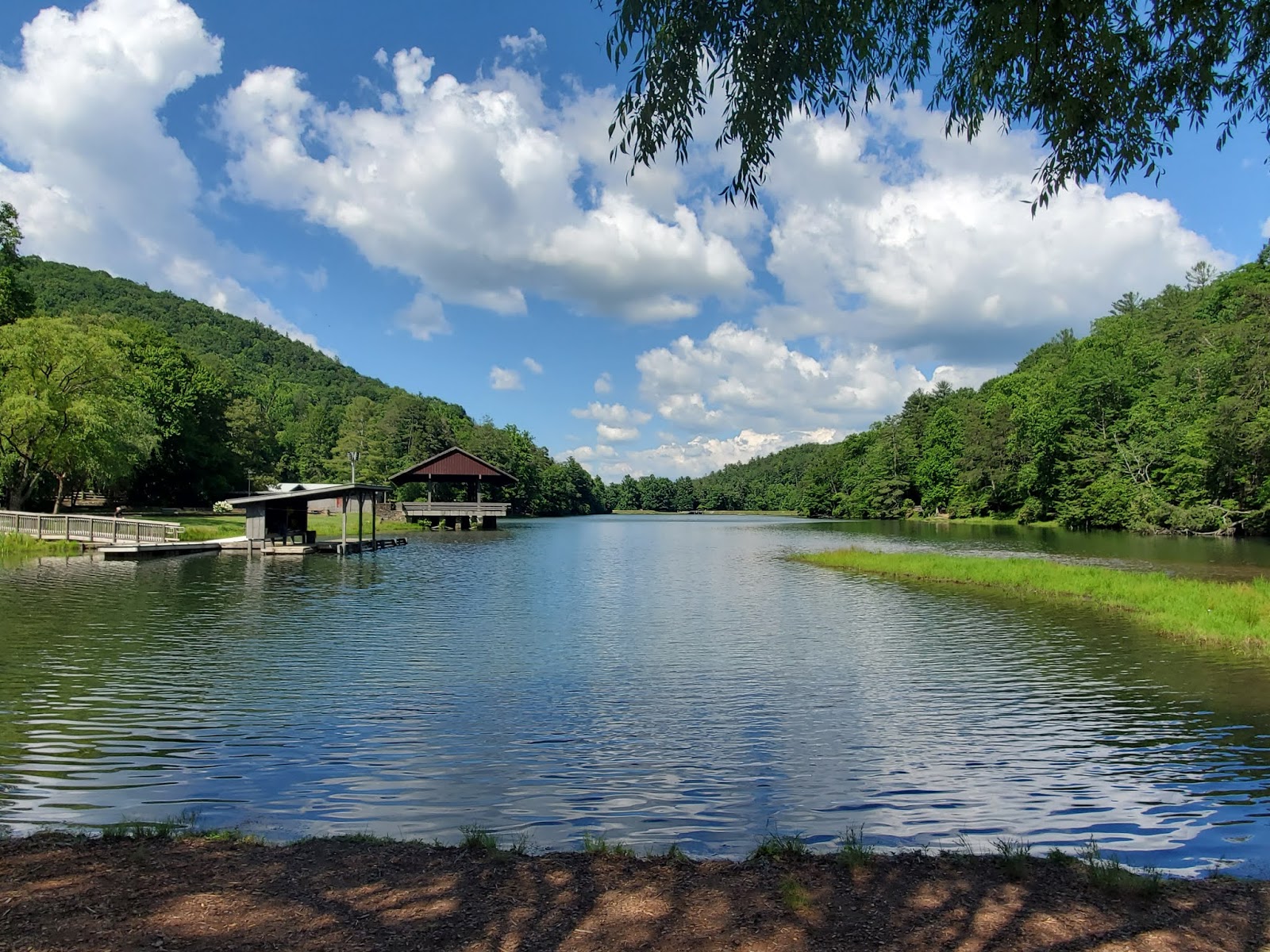