The final week of our travels around the Mitten passed in a blur of wonderful memories, including four more days with my parents, as well as a great visit with cousins (and fellow RV’ers!) John and Judy, up from Florida!

The popular town of Petoskey has a beautiful walkable gaslight district full of shops, tasting rooms, and restaurants, but our favorite fun here was biking the Little Traverse Wheelway.

One of the most lovely paths in all of Michigan (and that’s saying a lot in a state filled with them!), this 24-mile rails-to-trails delight is mostly flat … yippee yahoo!

Much of the trail runs along Little Traverse Bay, with open views of the water.  John and Judy brought along their new electric bikes, which get more tempting with every turn of the pedals.  Um, note to Santa …!…

In Charlevoix, an open-air tour of the famous “Mushroom Houses” in a six-person golf cart.

Earl Young created 28 whimsical homes, each one different from the next, from 1919 until 1954.

This one is perhaps the most distinct, lovingly restored by its new South African owners and with a stunning thatched roof.

From teeny tiny to large, the only thing they all share is lack of closet space and practically non-existent kitchens (he hated to cook).  Many features, like his fence walls, have almost a Seussical nature to them.

Why have one chimney when you can have three?  Earl Young loved the number 3.

Most of his homes have names … here “The Owl House.”  See the eyes?

Young dropped out of architecture school after a year and just did his own thing, drawing ideas in the dirt for his builders to follow rather than the hassle of actual plans or blueprints, and presumably eschewing niceties such as permits or inspections.  All of the rocks with which he built his houses were pulled right from nearby Lake Michigan.  3,000-pound support rock, anyone?

One of their more popular activities is the Potato Launch, where unused potatoes turn into mini-projectiles in a giant slingshot.  The guy in the blue shirt is about to let loose a whole buncha spud terrorism on those unsuspecting trees.

Baaaaa!  Little-known fact, our family’s livelihood included raising dairy goats in the 70’s and 80’s … we’re talking hundreds of goats at a time!

In Cross Village for Father’s Day, we set our sights on the landmark Legs Inn to get some Polish cuisine for our favorite accordion-playing, self-proclaimed Polack, my stepdad Don.

Named for the inverted stove legs on the railings of their roof, it was described by another RV blogger as “the Black Forest of Europe clashing with Native America Indian culture,” and since I can’t do much better wordwise than that, I’m stealing it.

It was built over several decades by Polish immigrant Stanley Smolak, starting in the 1920’s, and the quirky decor and authentic food draws people from miles around.  Cabbage rolls, polish sausage, pierogies, goulash … mmmmmm hearty and tasty!!!

The dinner was good, but the BEST dinners were always those held at the campground!

Bidding our relatives adieu, Philip and Sprinkles and I journeyed on solo, arriving at Sleeping Bear Dunes National Lakeshore.  Named one of the most beautiful spots in America in 2011 by ABC News, it is known for sandy beaches, lush forests, clear lakes, picturesque farmsteads, and 400-foot-high dunes towering above Lake Michigan.

SBD’s must-do 7-mile Pierce Stocking Scenic Drive has many scenic overlooks, and is one of the few covered bridges in the national bearing the National Park Service logo!

Wisconsin is only 54 miles due west, but rangers explained that due to the curvature of the Earth, we wouldn’t see any cheeseheads waving back at us.  Sand, skies, sea, sun, ahhhhhh spectacular!

Many places (especially those in National Parks) request that you “keep off the dunes” for ecological reasons.  Not here!  At Sleeping Bear Dunes, they say “climb away” and many people do!  Having climbed the dunes at White Sands National Monument in New Mexico, we know better … it’s exhausting!

Or how about the Three Bears of Farmhouses: Papa, Mama and Baby!  Also “awwwwwww,” am I right?

While in Yellowstone many years ago, we experienced a Super Gynormous Ice Vending Machine ….

…. but until SBD we had never experienced a Super Gynormous Firewood Vending Machine!

Ahhhhh, technology, making humans obsolete one industry at a time!

In Holland, you can expect a cornucopia of themed restaurants and gift shops, tulips, wooden clogs, and bad Dutch puns on t-shirts.

The highlight of Holland MI is the 250-year-old De Kwann windmill at Windmill Island Gardens, and she is truly a beauty!

The windmill was shipped over from Holland and when the blades were replaced, they still had bullet holes in them from WWII.  It’s a hard-working windmill, grinding wheat flour daily on these huge grindstones.

Also hard at work, the busy bees pollinating the gorgeous gardens, which were designed by the former head landscaper of Mackinac Island’s Grand Hotel, mentioned in our previous Michigan blog.

The grounds are designed as a typical Dutch village with costumed characters, a carousel, and the perfect little Wooden Clog Succulent Garden.

“The Four Columns,” a circa-1928 organ which played in the streets of Amsterdam, and gifted to the U.S. in appreciation of its role in the liberation of The Netherlands in WWII.  It plays its gorgeous rich tones in song every 30 minutes, reverberating over the gardens.

Also at Windmill Island Gardens, walking trails and lots of wildlife.  Here, a darling little baby Sandhill Crane, not to be called a “chick” but instead a “colt”!  Don’t ask me why, but it’s true (because the Internet says so).

He will grow up to look just like his mommy, seen here irresponsibly heading for the bars even though it’s not yet 5 PM.

If you suspect wooden clogs to be uncomfortable, you’d be right.  But here you have an alternative … rubber Crocs Clogs with fur lining!  Functional, yet stylish ! …. uh, sorta.

We try to avoid big cities, but Grand Rapids is just the kind of big city we love … not TOO big, perfectly gentrified, having cosmopolitan feel but retaining small-time charm.  Grand Rapids has a ridiculous amount of incredible city amenities and improvements, thanks to one multi-generational, multi-billionaire clan, the DeVos Family.

Richard DeVos was a co-founder of Amway Corp., and his son-in-law Frederick Meijer founder of a huge Walmart-style grocery store empire called (appropriately, narcisstically) call Meijer.  They, and other mega-wealthy family members (including THAT DeVos, Betsy DeVos — embattled US Secretary of Education under Trump) are 1%’ers and extremely generous benefactors to Grand Rapids and pretty much everything here is named for them. Parks, bike trails, event venues, museums and much much more, all benefiting the Grand Rapids 99%’ers.

Grand Rapids’ Fulton Street Farmers Market is one of the largest and most highly-attended farmers markets in the U.S., year-round and multiple times per week.

We were excited to attend our fourth presidential museum, the Gerald R. Ford Presidential Museum (and Burial Site).

Of the 4 we’ve visited, here is our extremely biased opinion of how the museums stack up.  Eventually we’d like to get to all 13 of them!

Ford was a huge supporter of space exploration as both a Member of Congress and as President, and specifically asked that his museum honor his commitment to the space program.

The Museum of course also honors his widely-loved and highly-respected wife, Betty.  My favorite photograph was from her last day in the White House.  She was going around, poking her head in every office, saying goodbyes, and when she got to the Cabinet war room, Betty (a classical dancer who had trained with Martha Graham) said, “You know, I’ve always wanted to dance on this table.”  She jumped up on top and struck a darling pose … the rest is history!

Ford is of course remembered for his leadership in the aftermath of the Nixon resignation.  Presidential scholars agree, he was the type of man who steadfastly governed by his principles, rather than politics.

Back at our campground on the Grand River, lazy sun-filled afternoons were interrupted only by the passing of the Grand Lady Paddlewheel Steamboat, a charming sight indeed.

It recalled our trip where the Lucky Charm was similarly visited by the Silverton Railroad train!

Lastly, Michigan introduced us to the perfect campsite accessory for moody campers.

Orrrrr, maybe NOT SO MUCH?  Just spin the sign!  Presto … everyone knows!

Michigan, you did not disappoint with your wide range of delights.  Up next, Niagara Falls and a visit from daughter Taylor!  The Lucky Charm next heads to New York state!

Thanks for following Charming Adventures! 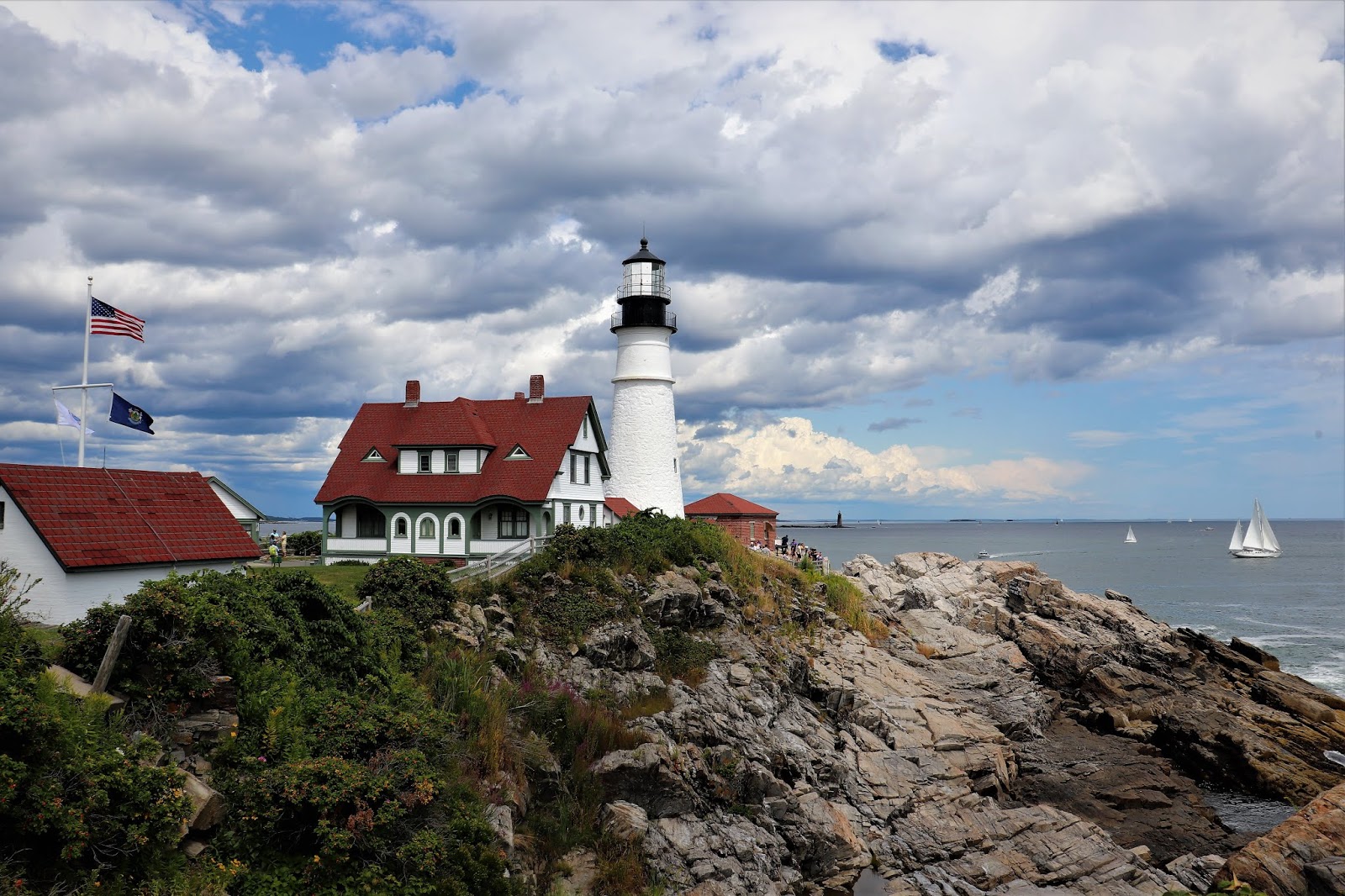 BOLT: “Best of the Loop Trip”!