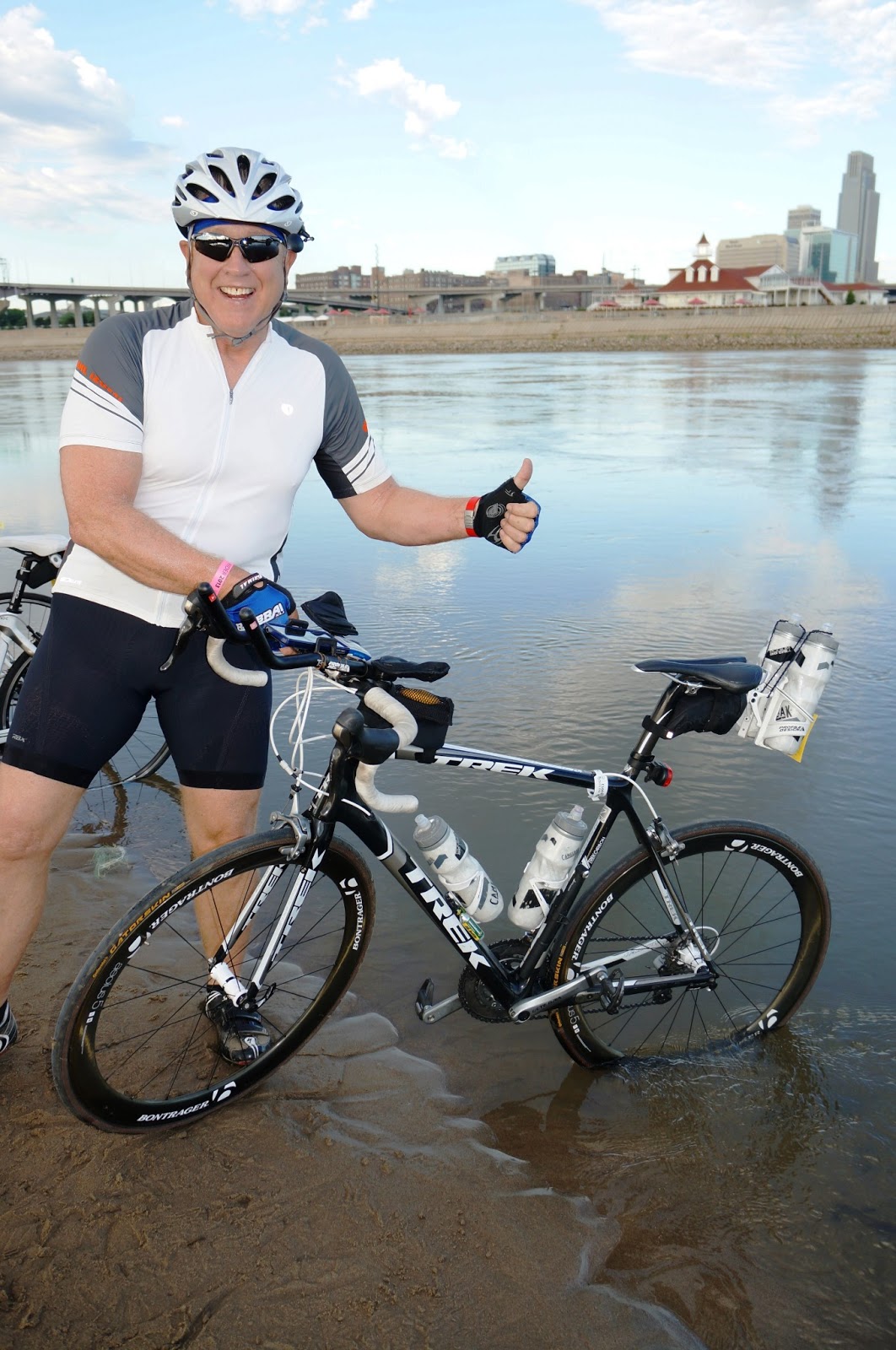 Day One of the RAGBRAI Ride started with a time-honored tradition, like all of the 40 previous RAGBRAI rides, with a “back tire dip” in the Missouri River.  All of the riders take their bikes down and baptize them for good luck, hoping and praying that the Bicyling Gods will keep them safe until they can dip their front tires into the Mississippi River seven days later.  “Crash” Miller was not going to miss that opportunity!

Barely 11 miles into the ride, 8:15 AM on a Sunday morning, the first small town came into view. With bars and restaurants on both sides of the street, all establishments were already packed with hundreds of riders drinking Bloody Mary’s and celebrating the start of the ride with shots of Tequila.  A rock band was playing while multiple bikers danced in the street and everyone was laughing and cavorting.  Is this a bike ride?  Or a party?  Maybe both!  Compound that scene with the fact that there is a small town every 5 to 10 miles, with the same action happening, and you are starting to understand what RAGBRAI is all about ….

In each small town, all of the residents of the town and surrounding areas come out to greet the riders and watch the biggest thing that has happened to their town in a decade or more.  There were food stands of every type, many of them fund-raisers for local churches and youth groups and 4-H clubs … huge pork chops on a stick, chicken kabobs, ham balls, grilled sweet corn, root beer floats, homemade kiln-fired pizza … everything being made fresh right before your very eyes.  And of course, who could resist this beauty hawking chocolate-covered bacon!

The towns were inundated with thousands upon thousands of bikers, so thick that at times you literally had to get off your bike and walk because there were so many people in front of you. Fortunately, everybody was happy to get off and nobody was trying to force-pedal their way through the masses. Residents stood in their front yards spraying the grateful riders with garden hoses and squirt guns, and on every corner a little kids’ lemonade stand was erected for the occasion.  Iowa is absolutely gorgeous (we thought it was flat, but it is NOT, lots of beautiful green rolling hills!) and the weather has been great, 80’s and mostly cloudy, which is delightful … and no bugs — SO FAR!

Philip was most amused by a recumbent bike that was decorated in a banana outfit, and couldn’t help but do a double-take as a full-sized banana whizzed past.  There was every size, shape, and age of rider you could ever imagine, including people who looked to be in their late 80’s or early 90’s and many young kids.  Philip kept thinking the sea of riders would “thin out” and yet it literally never happened during four straight hours of riding, but it made the ride so much more festive and entertaining!

RAGBRAI had set up rows of Porta-Potties, but the wait was so long that most people (including Philip) just went to a nearby cornfield, stepped into the first row of 6-feet tall stalks and did their business.  In fact, at one such cornfield, there was a lady standing there directing traffic … “ladies to left, gentlemen to the right” … now that’s efficiency!

Today’s 55-mile ride ended in Harlan, Iowa, a charming town with a huge old County Courthouse in the center square (think of “Back To The Future”), ringed by many small businesses and all the streets set up with yet more food, drinks and bicycling related products and services.  We experienced a refreshing taste of Midwestern hospitality when we ended up at a stand without any money, having already ordered cold drinks, a half-pound breaded pork tenderloin sandwich for Philip and a foot-long corn dog for me (don’t judge).  We sheepishly told the lady we had forgotten our wallets and she said, “Well go eat your food and you can just pay me later, or not at all!”  We were speechless (and grateful) and of course returned to pay and give her a hefty tip in gratitude.  People back here are just so nice!

Our home for the night …… Prairie Rose State Park, with a picturesque lake right across from our spot, and from which Philip can pick up the Day Two route first thing tomorrow.  Tonight we are having grilled teriyaki tenderloin steaks, mashed potatoes, steamed broccoli and blueberry martinis … gotta “carb up,” ya know! Tomorrow is the longest day of the week … either 80 or 101 miles, depending on which route he chooses! Go Philip Go!!!!  So proud of you!